According to some Western sources, Helena Blavatsky is a supporter of the occult and spiritualism; according to Russian sources (some philosophical dictionaries, encyclopedias, textbooks), she is a philosopher, scientist and religious scholar. In 1848-1875, she actually made three round trips.

In 1875, in New York, together with Colonel H. S. Olcott, she founded the Theosophical Society, the main goal of which was "to create the nucleus of the World Brotherhood, where differences of race, color, sex, caste and creed will not matter".

The maternal lineage of Elena Petrovna Blavatskaya goes back through Mikhail of Chernigov to the founder of statehood in Russia - Rurik. 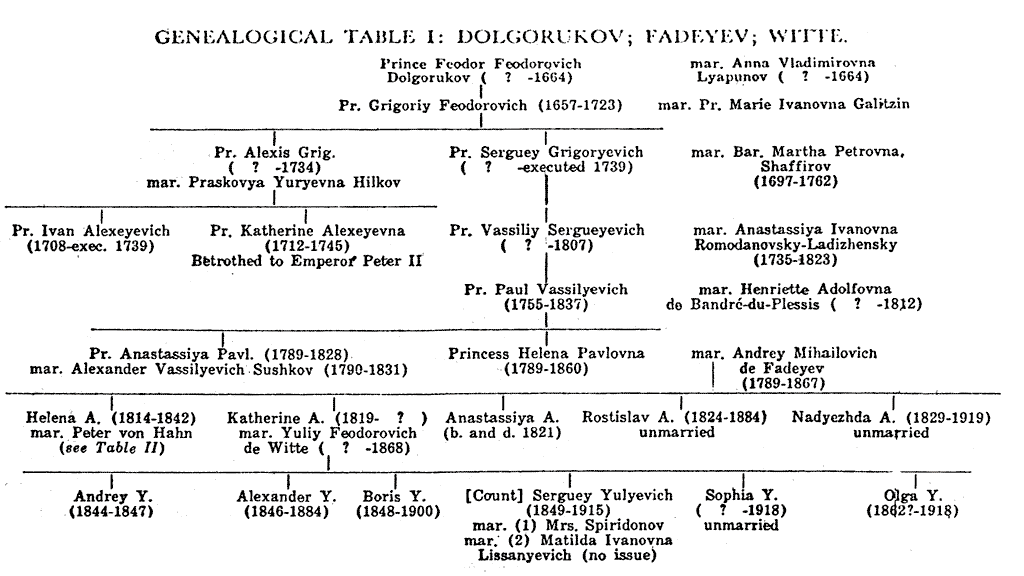 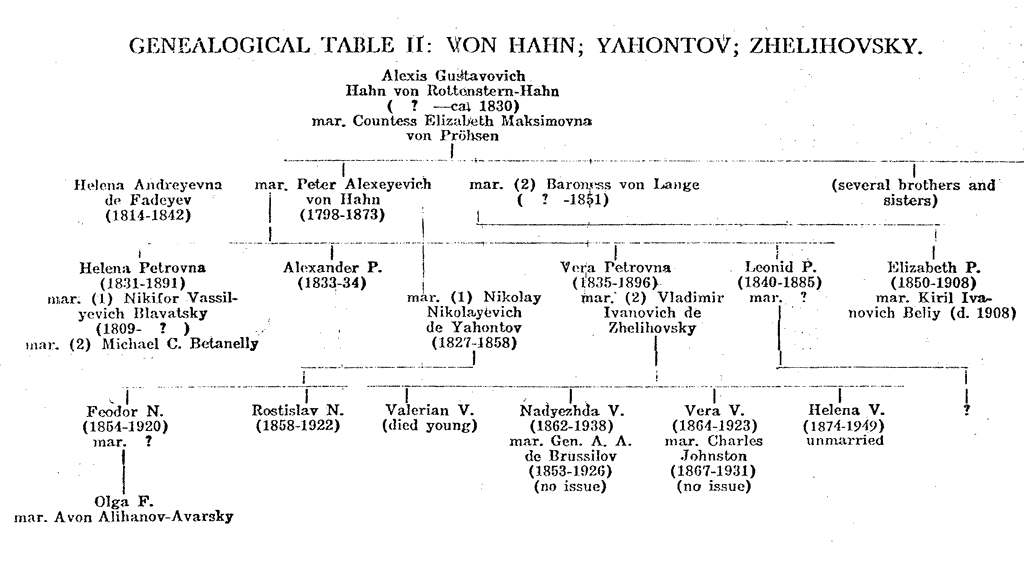 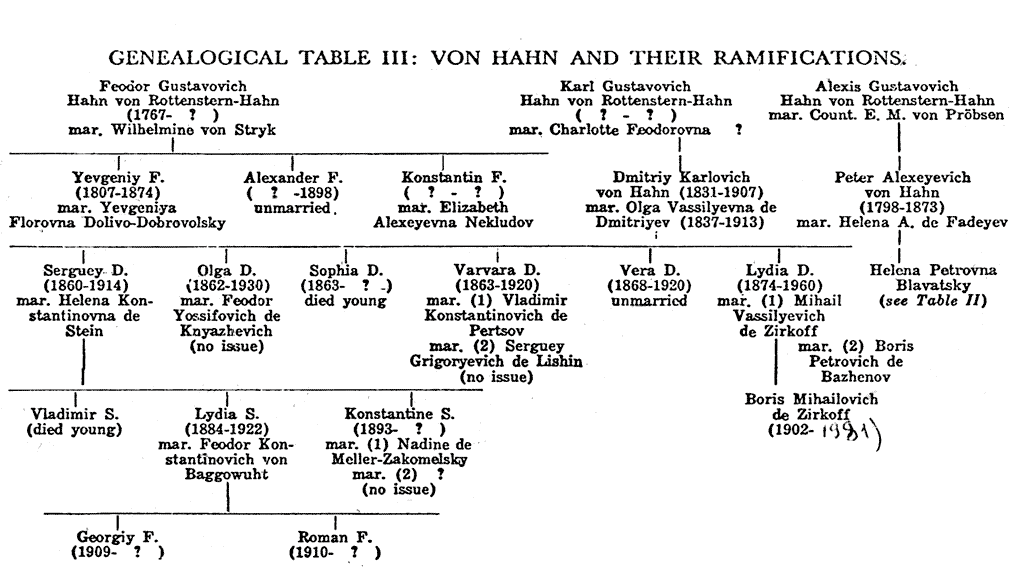 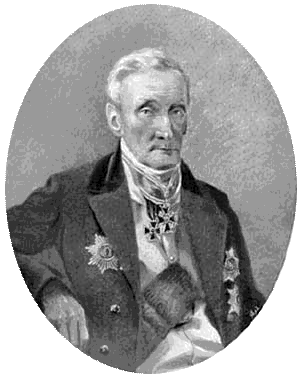 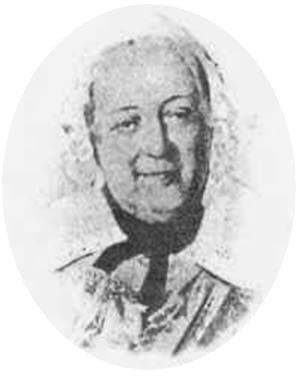 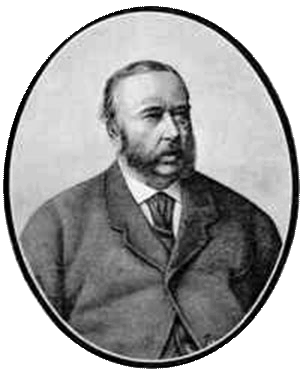 Great-grandfather of Helena Blavatsky, Prince Pavel Vasilyevich Dolgorukov (1755-1837), Major General of the time of Catherine II, had the highest military award - the Order of St. George and was a friend and colleague of Kutuzov. Some authors believe that P. V. Dolgorukov was a famous Freemason and Rosicrucian, and there were even rumors that he met with Cagliostro and Count Saint-Germain.

However, the most famous and authoritative biographies of Count Saint -Germain is not said anything about such a meeting, moreover, during the stay of the Count Saint-Germain in Russia (1762), Pavel Vasilyevich was only 7 years old.

His wife was Henrietta de Bandra du Plessis, daughter of Adolf Frantsevich, who commanded an army corps in the Crimean campaign and, according to A.M. Fadeev, was Suvorov's favorite. The daughter of Pavel Vasilyevich and Henrietta Adolfovna, Princess Elena Pavlovna, the grandmother of E.P. Blavatsky, received a decent education at home, knew 5 foreign languages, was versed in archeology, numismatics, botany. Fadeeva's herbaria and her drawings of various plants, currently stored in the archive of the Academy of Sciences, were known to many scientists and aroused admiration. Elena Pavlovna corresponded with German scientist Alexander Humboldt, English geologist, founder of the Geographical Society Rodrik Murchison, Swedish Christian botanist Steven, who studied the flora and fauna of the Crimea and the Caucasus. According to A. F. Pisareva, the botanist Homer de Gel named the shell he found in honor of Elena Pavlovna - Venus-Fadeeff.

1813The princess married Andrei Mikhailovich Fadeev, a government official who later became a privy councilor, governor of Saratov and Tiflis, whose lineage goes back to the Russian pillar nobles and the Livonian Germans von Krause. The great-grandfather of Andrey Mikhailovich - Peter Mikhailovich Fadeev, was a captain of the army of Peter I. Elena Pavlovna and Andrey Mikhailovich had four children: the eldest daughter - Elena Gan - a famous writer (she was called the Russian Georges Sand), the mother of Elena Petrovna Blavatskaya, Vera Petrovna Zhelikhovskaya and Leonid Gan; son - Rostislav Fadeev - general, military writer and reformer; daughter Ekaterina Andreevna - mother of the outstanding Russian statesman Sergei Yulievich Witte; daughter - Nadezhda Andreevna, an active member of the Theosophical Society.

S.Yu. Witte reported that his great-grandfather P.V. Dolgorukov, during his daughter's wedding, blessed her and his son-in-law with an ancient cross, which, according to family legends, belonged to the Grand Duke of Kiev, St. Michael of Chernigov. Later this cross passed to Elena Pavlovna, and then to S. Yu. Witte himself.

Along the line of her father - Peter Alekseevich Gana, Elena Petrovna belonged to the Baltic German family Gan. Boris Tsirkov, editor and active propagandist of the Theosophical doctrine, in the preface to Blavatsky's collected works indicates that Hahn (the ancestors of the EPB from the parental line) belongs to the count family von Hahn from Basedow (Mecklenburg), which, according to other sources, dates back to the female line of the Carolingian dynasty and the German knights-crusaders.But so far, no documents have been found confirming the family ties of the family of Helena Blavatsky with the Mecklenburg counts: in the service list "Alexey Fedorov, son of Gan" (1751-1815) - the grandfather of the EPB, the commandant of the Kamenets-Podolsk fortress - is listed as a the inhabitants, the father was a foreign citizen, was in Estonia the krai komisar ”; the archives contain documents confirming the existence of the "kraiskomisar" Johann Friedrich Hahn (Johann Friedrich Hahn), who was born in 1719 in Narva and died there on May 31, 1803, but in which nothing is written about the origin and family ties. It is interesting that Tsirkov himself - from the female line - was involved in the Hahn family, but not Johann Friedrich, but Johann August von Hahn (documented not connected with the EPB family). 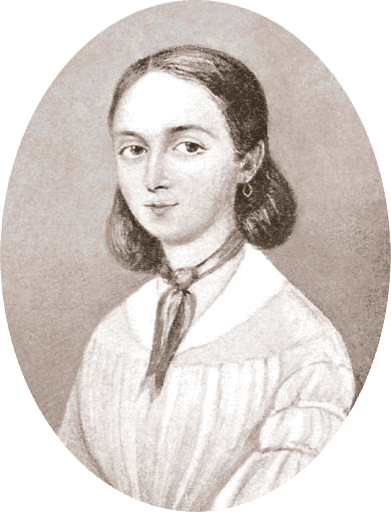 In 1831, the Hans had their first daughter, Helen (in the future, the famous theosophist Helena Blavatsky), and in 1835, their second daughter, Vera, the future writer Zhelikhovskaya. Elena Gan traveled across Ukraine with her young children and her husband. In 1831-1832, then in 1834-1835, the Gan family lived in the village of Romankovo, then in 1837-1839 in Kamenskoye.

Pyotr Alekseevich Gan is the father of Helena Blavatsky. His portrait has not survived, but there is the family coat of arms, which comes from the ancient titled German family Hahn von Roterstern Hahn. 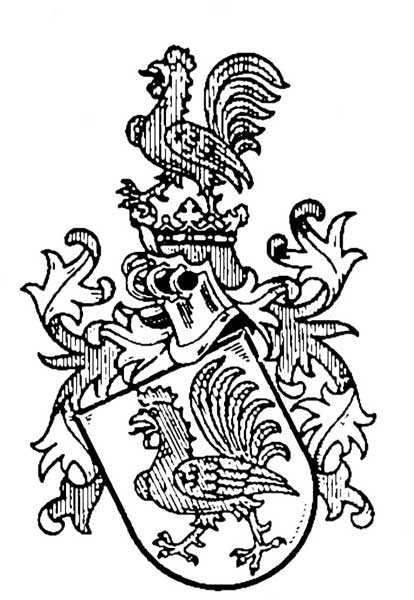 According to family legend, the ancestor of Peter Alekseevich was a knight-crusader. In one of the campaigns he was saved by the crow of a rooster, since then the rooster began to decorate the coat of arms and shield of the Rotersterns, and Gahn was added to the surname (in German - rooster).

Pyotr Alekseevich graduated from the Corps of Pages and became an officer horse artillery, battery commander.

After leaving military service, he worked as chief postmaster in the city of Grodno .