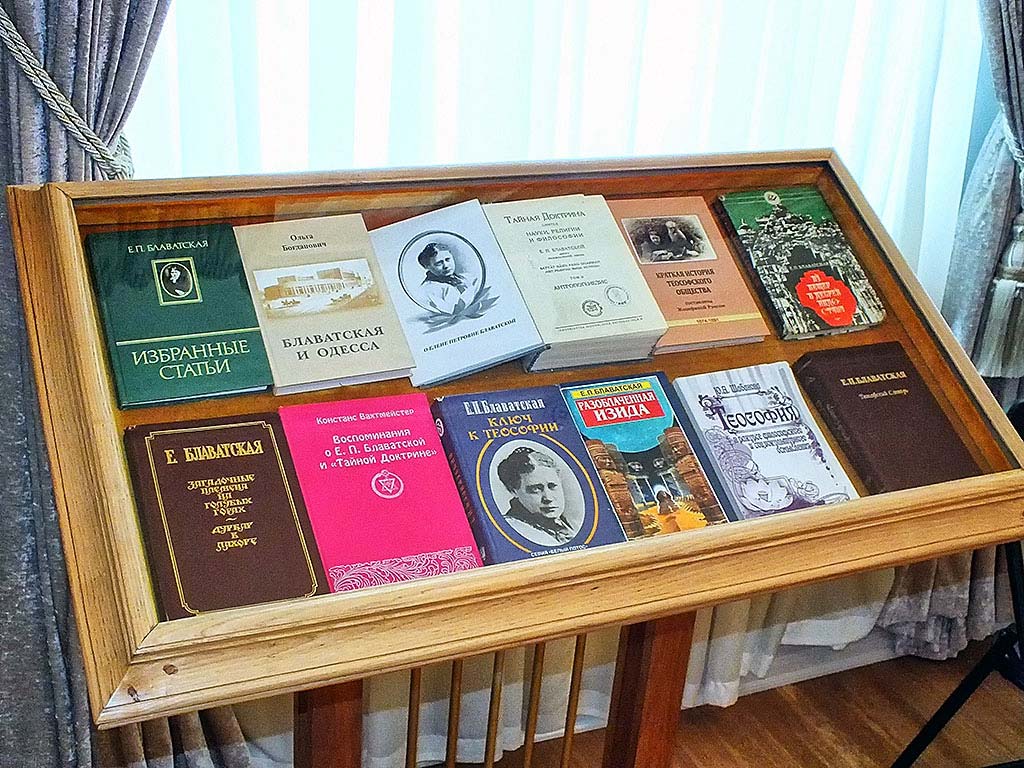 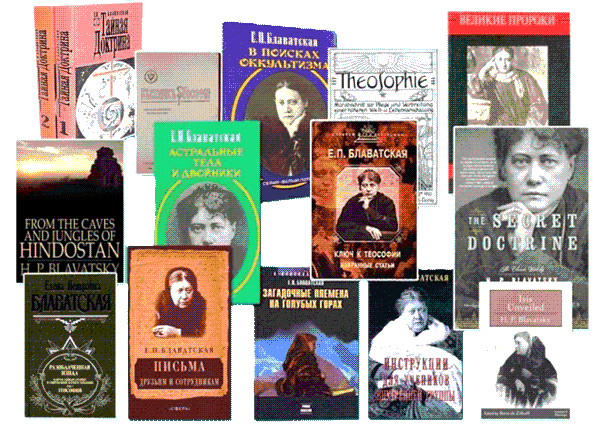 The Key to Theosophy

The book has a dedication: "To all my Pupils, so that in turn they can learn and teach".

In the Preface, Helena Petrovna wrote:

The purpose of this book is precisely expressed in its title, The Key to Theosophy, and needs but a few words of explanation. It is not a complete or exhaustive textbook of Theosophy, but only a key to unlock the door that leads to the deeper study. It traces the broad outlines of the Wisdom Religion and explains its fundamental principles, meeting at the same time the various objections raised by the average Western inquirer and endeavouring to present unfamiliar concepts in a form as a simple and language as clear as possible. That it should succeed in making Theosophy intelligible without mental effort on the part of the reader, would be too much to expect; but it is hoped that the obscurity still left is  of the thought not of the language, is due to depth not to confusion. To the mentally lazy or obtuse, Theosophy must remain a riddle; for in the world mental, as in the world spiritual, each man must progress by his own efforts.

I remember reading, at the insistence of the brothers, Madame Blavatsky's The Key to Theosophy. This book awakened in me the desire to read books on Hinduism and forever dispelled the missionary notion that Hinduism is rife with superstition
National Leader of India Mohandas Karamchand Gandhi 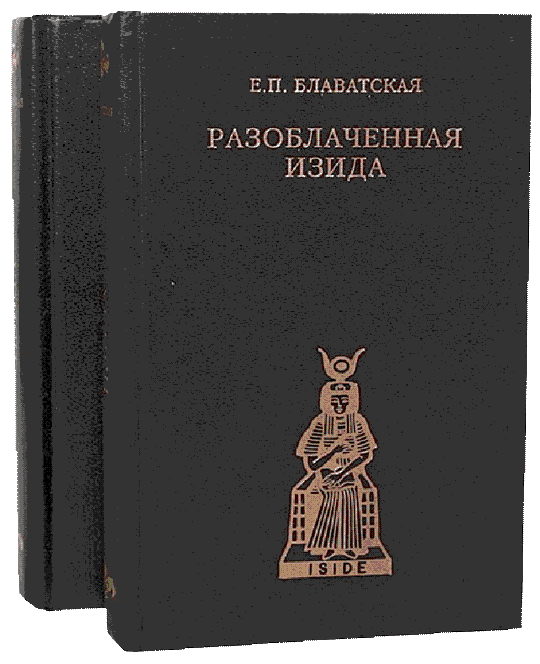 The author dedicates this work to the Theosophical Society, which was founded in New York in 1875 to study what these volumes are about.

The information presented in this book is the fruit of a fairly close acquaintance with the Eastern adepts and the study of their science. It is offered to those who are ready to accept the truth, wherever he meets it, and to defend it, even looking directly in the face of widespread prejudices. This is an attempt to help researchers discern the life principles underlying the philosophical systems of antiquity.

The book was written with all sincerity. It wants to pay tribute and speak the truth, without malice and without bias. But it shows neither condescension to the delusion sitting on the throne, nor respect for the self-appointed authority. It demands respect for the maligned past for its accomplishments - a respect that has not been given to it for so long. It demands the return of other people's garments to their owners and the restoration of slandered but glorious reputations. Its criticism in a different spirit will not be directed to any form of worship, to any religious belief, or to any scientific hypothesis.

People and parties, sects and schools are only one-day moths of the world day. TRUTH, seated high on its diamond rock, alone reigns supreme forever.

"Nothing proves that civilization and knowledge then rise and progress with her as in the case of other peoples, but everything seems to be referable, in the same perfection, to the earliest dates. That no nation knew as much as herself, is a fact demonstrated by history."

"Mechanism," says Eusebe Salverte, "was carried by the ancients to a point of perfection that has never been attained in modern times. We would inquire if their inventions have been surpassed in our age? Certainly not; and at the present day, with all the means that the progress of science and modern discovery have placed in the hands of the mechanic, have we not been assailed by numerous difficulties in striving to place on a pedestal one of those monoliths that the Egyptians forty centuries ago erected in such numbers before their sacred edifices."

As far back as we can glance into history, to the reign of Menes, the most ancient of the kings that we know anything about, we find proofs that the Egyptians were far better acquainted with hydrostatics and hydraulic engineering than ourselves. The gigantic work of turning the course of the Nile — or rather of its three principal branches — and bringing it to Memphis, was accomplished during the reign of that monarch!

If we now turn to architecture, we find displayed before our eyes, wonders which baffle all description. Referring to the temples of Philæ, Abu Simbel, Dendera, Edfu, and Karnak, Professor Carpenter remarks that "these stupendous and beautiful erections … these gigantic pyramids and temples" have a "vastness and beauty" which are "still impressive after the lapse of thousands of years."

Who, of our modern architects and chemists, will rediscover the indestructible cement of the oldest Egyptian buildings?

"The skill of the ancients in quarrying," says Bunsen, "is displayed the most in the extracting of the huge blocks, out of which obelisks and colossal statues were hewn — obelisks ninety feet high, and statues forty feet high, made out of one stone!"

"Philologists, astronomers, chemists, painters, architects, physicians, must return to Egypt to learn the origin of language and writing; of the calendar and solar motion; of the art of cutting granite with a copper chisel, and of giving elasticity to a copper sword; of making glass with the variegated hues of the rainbow; of moving single blocks of polished syenite, nine hundred tons in weight, for any distance, by land and water; of building arches, rounded and pointed, with masonic precision unsurpassed at the present day, and antecedent by 2,000 years to the 'Cloaca Magna' of Rome; of sculpturing a Doric column 1,000 years before the Dorians are known in history; of fresco painting in imperishable colors; of practical knowledge in anatomy; and of time-defying pyramid-building."

The sun gives everything and takes nothing back from its system. The Sun is not something "solid" or "liquid", not even incandescent gases, but a gigantic ball of electro-magnetic Forces, a reserve of world life and movement, which pulsates in all directions, saturating the smallest atom with radiant energy, which is inexhaustible and knows no increase nor diminishing and will continue its self-generating activity until the end of our Solar Manvantara.

The sun is only one of a myriad of magnets scattered in space. There is no more warmth in the sun than in the moon, or in the host of sparkling stars that overwhelm space. Gravity, as Newton understood it, does not exist, but only magnetic attraction and repulsion, and only thanks to their magnetism, the movement of the planets of the solar system in their orbits is regulated by the even more powerful magnetism of the sun, and not by their weight or gravity.

The space between the sun and the earth is filled with a material environment that corresponds to the Kabbalistic "astral light". The passage of light through this medium creates tremendous friction. Friction generates electricity; it is that electricity and its relative magnetism that create those terrible forces of nature that produce various changes in, on and around our planet, with which we meet everywhere.

Earthly heat cannot be directly extracted from the sun, for heat rises. In any case, science should know that the heat that the Earth receives from the rays of the sun is, to the greatest extent, only a third, if not less, of the amount it receives directly from meteors. The increase in the average temperature on the planet comes from the expansion of the atmosphere, which itself owes the same meteoric presence. 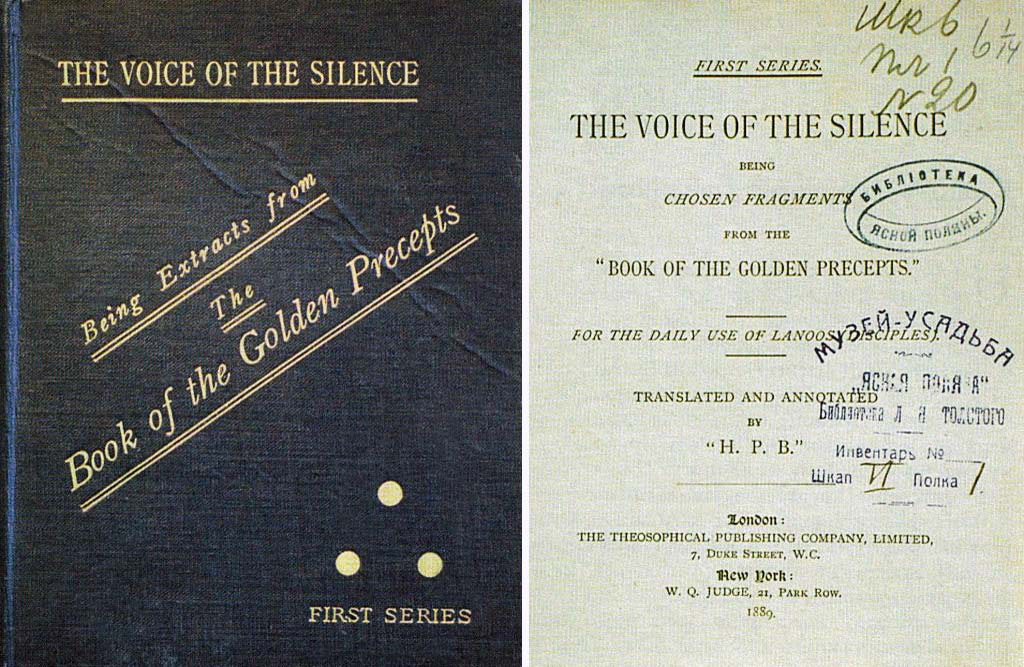 The book is on display at the Leo Tolstoy House-Museum in Yasnaya Polyana.

The book "Voice of Silence", published in 1927 in Beijing, with a portrait of Tashi Lama IX: 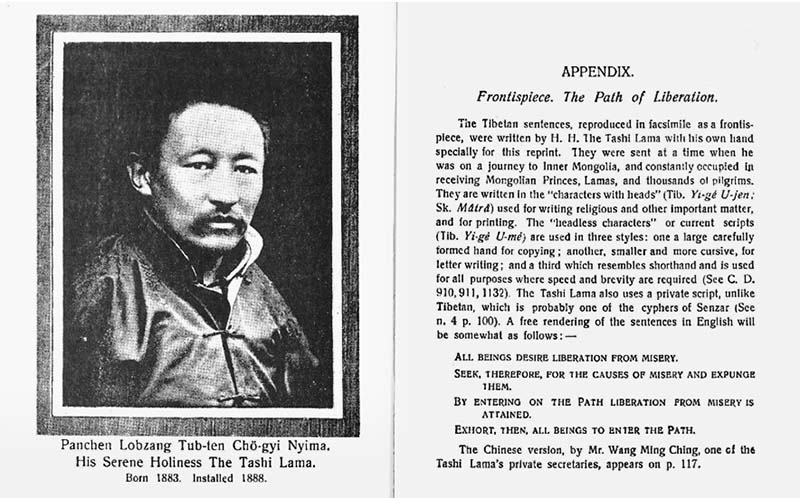 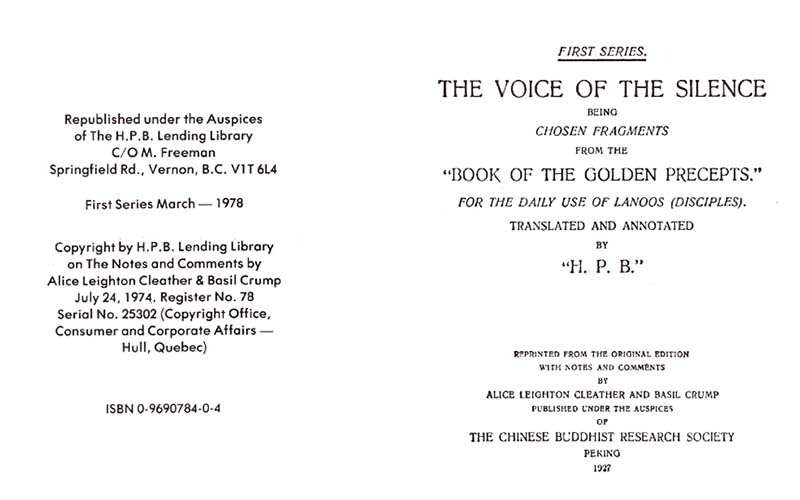 I first met the members of the Theosophical Society more than thirty years ago in India, during the 2500th anniversary of the Buddha. Since then, I have had the pleasure of exchanging thoughts with Theosophists from different parts of the world on more than one occasion. I deeply admire their spiritual activities. I believe that you can be a wonderful person without being spiritual. I also reserve the right for a person not to strive for spirituality and not to be bound by one religion or another. At the same time, I have always believed that it is internal or spiritual development that makes a person happier and increases his ability to benefit other people.

Therefore, I am proud of my long friendship with Theosophists and was delighted to hear of the anniversary edition of the VOICE OF SILENCE coming out this year. I think this book has had a strong influence on many people who are sincerely seeking and striving to embrace the wisdom and compassion of the Bodhisattva Path.