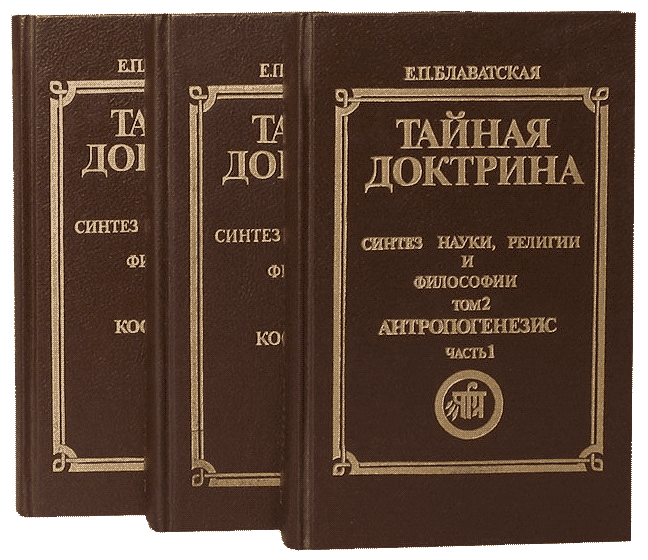 This Work I Dedicate to all True Theosophists, In every Country, And of every Race, For they called it forth, and for them it was recorded.
О.П. Блаватська

at her desk in the morning 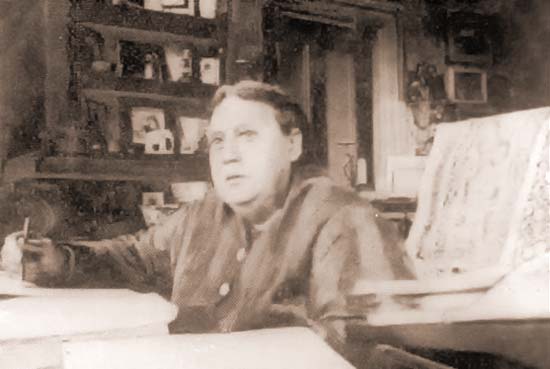 "The Secret Doctrine" crowns the literary activity of Helena Petrovna Blavatsky, this epoch-making creation is only now beginning to gain recognition by the outstanding minds of our time, and there is no doubt that in the twenty-first century it will meet even greater response and receive the highest appreciation.
Boris de Zirkoff, Helena Petrovna Blavatsky: A Brief Sketch of Life and Work
H.P. Blavatsky's "The Secret Doctrine" is a work of colossal volume and richness of facts. Moreover, the logic in this book seemed to me some kind of inhuman: everything is stated in stanzas, reading which, you can find the beginning of thought at the end of the book, the middle - at the beginning, and the end - in the middle. At first, when I first read The Secret Doctrine, I was greatly annoyed by it, but then I realized that there is a much higher logic here, perhaps the logic of the Supreme Reason, which my humble human brain could only partially grasp and sometimes.
Ernest Muldashev, Professor, Dr. med. sciences

The main provisions of the Theosophical teachings of H.P. Blavatsky

The main ideas of the teaching

The seven planes of cosmic consciousness: 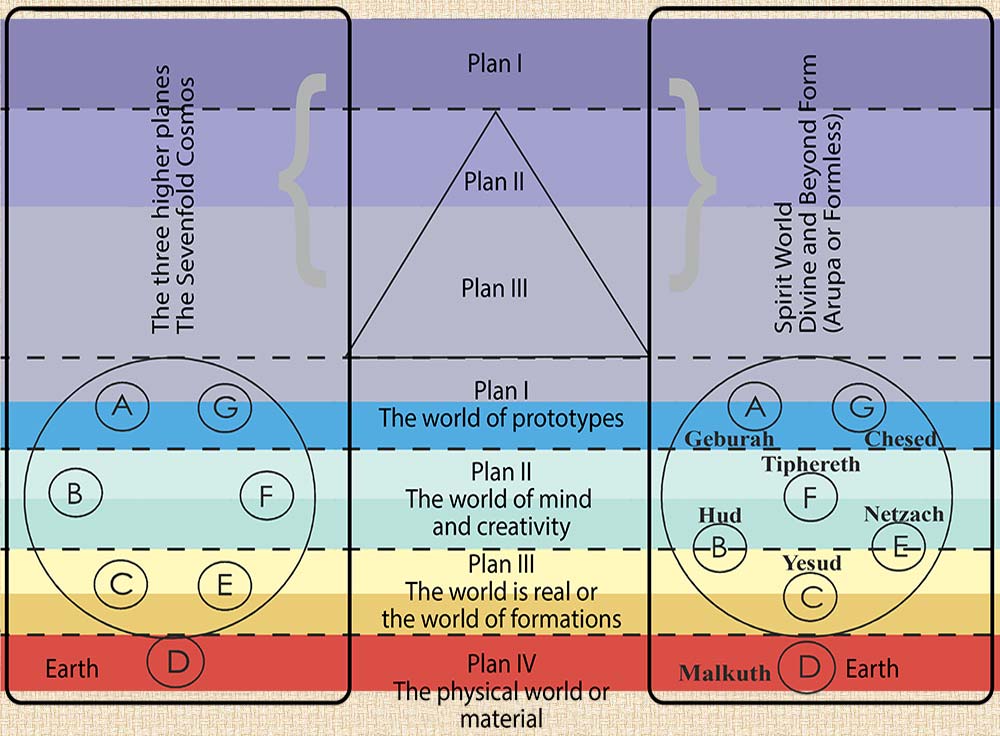 Topics covered in The Secret Doctrine by H.P. Blavatsky

The law of conformity (analogies)

Diagram of correspondences of human principles and planetary division 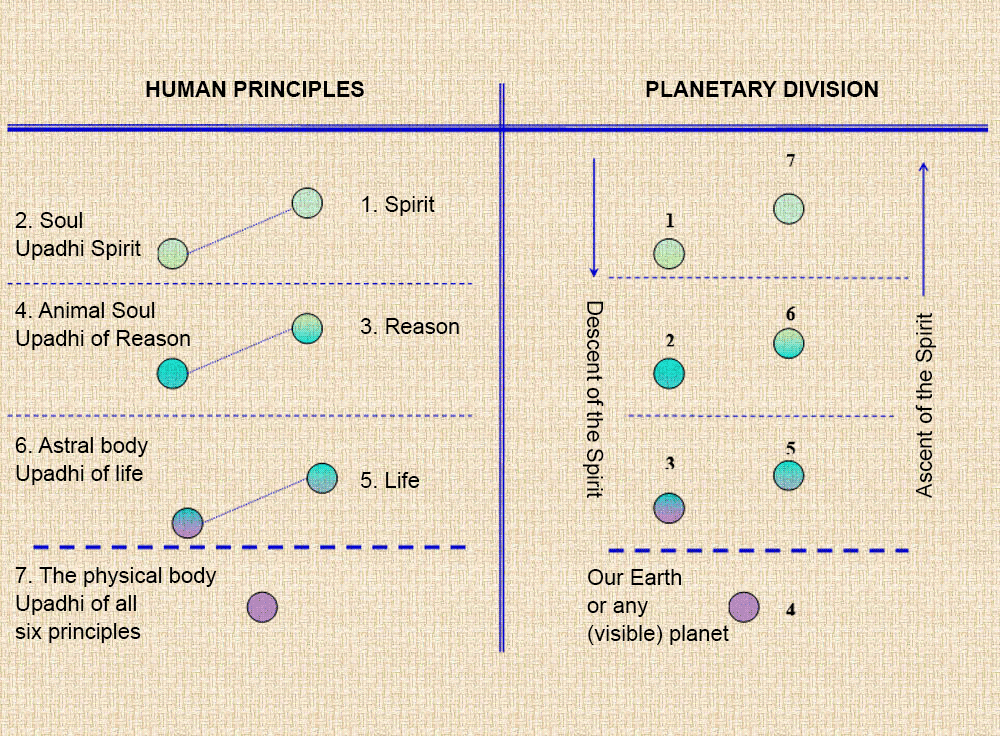 As shown in the Diagram, there is an eternal chain of cause and effect, and a perfect analogy that runs through everything and brings together all the lines of evolution.

In occult Science, the law of analogy is the first and the most important key to cosmic physics; but it must be studied in its smallest detail, and "returned seven times" before it can be understood. Occult philosophy is the only science that can teach this.

The operation of the law of analogy is unshakable and universal. And there is no phenomenon or sphere of life where it would not be manifested. What was, what will be, there is nothing new under the Sun!

This is how events arise and develop. They have a past linked to their present, and we feel a well-justified belief that the destined future will also be linked to the present and past. This sequence and unity of history is repeated before our eyes in all comprehensible stages of progress. Phenomena provide us with the basis for the generalization of two laws (development and correspondence), which, truly, are the principles of scientific foresight, and only with their help does the human mind penetrate into the sealed records of the past and into the undisclosed pages of the future.

The moon is the mother of the earth

Everything in the metaphysical and physical world is septenary. The evolution of life takes place on seven spheres or bodies, from the First to the Seventh, during seven Rounds or Seven cycles.

The spheres are formed by a process called by occultists "the rebirth of the planetary chain" (see illustration). When the seventh and last Round began, the highest (or first) Sphere A, and with it all the others in sequence until the last G, instead of entering into a more or less long period of rest, as it was in the previous six Rounds, begin to die, then each Sphere must transfer its life and energy to another planet.

In reality the Moon is only the satellite of the Earth in one respect, viz., that physically the Moon revolves round the Earth. But in every other respect it is the Earth which is the satellite of the Moon, and not vice versa. Startling as the statement may seem it is not without confirmation from scientific knowledge. It is evidenced by the tides, by the cyclic changes in many forms of disease which coincide with the lunar phases; it can be traced in the growth of plants, and is very marked in the phenomena of human gestation and conception. The importance of the Moon and its influence on the Earth were recognized in every ancient religion, notably the Jewish, and have been remarked by many observers of psychical and physical phenomena.

It is, then, the Moon that plays the largest and most important part, as well in the formation of the Earth itself, as in the peopling thereof with human beings. The "Lunar Monads" or Pitris, the ancestors of man, become in reality man himself. They are the "Monads" who enter on the cycle of evolution on Globe A, and who, passing round the chain of planets, evolve the human form as has just been shown. At the beginning of the human stage of the Fourth Round on this Globe, they "ooze out" their astral doubles from the "apelike" forms which they had evolved in Round III. And it is this subtle, finer form, which serves as the model round which Nature builds physical man.

The human Race has been compared to a tree, and this serves admirably as an illustration. The main stem of a tree may be compared to the ROOT-RACE (A).

Its larger limbs to the various SUB-RACES; seven in number (B1, B2).

On each of these limbs are seven BRANCHES, OR FAMILY-RACES. (C).

After this the cactus-plant is a better illustration, for its fleshy "leaves" are covered with sharp spines, each of which may be compared to a nation or tribe of human beings.

Now our Fifth Root-Race has already been in existence.

Each Family-Race has an average existence of about 30,000 years. Thus the European "Family Race" has still a good many thousand years to run, although the nations or the innumerable spines upon it, vary with each succeeding "season" of three or four thousand years. It is somewhat curious to mark the comparative approximation of duration between the lives of a "Family-Race" - 30 000 and a "Sidereal year" - 25868.

The three "Virgins," or Virgo in three different positions in the Egyptian Zodiac meant the record of the first three "divine or astronomical Dynasties," who taught the Third Root-Race. The same symbolical record of the human races and the three Dynasties, which preceded the purely human kings, was found in the distribution of the tiers and passages of the Egyptian Labyrinth.

The Egyptian Zodiac is between 75 and 80,000 years old. Since the three inversions of the poles that occurred during this time undoubtedly changed the face of the Zodiac, a new Zodiac had to be built each time.

The Greek zodiac is much younger than the Egyptian, its age is no more than 17,000 years. 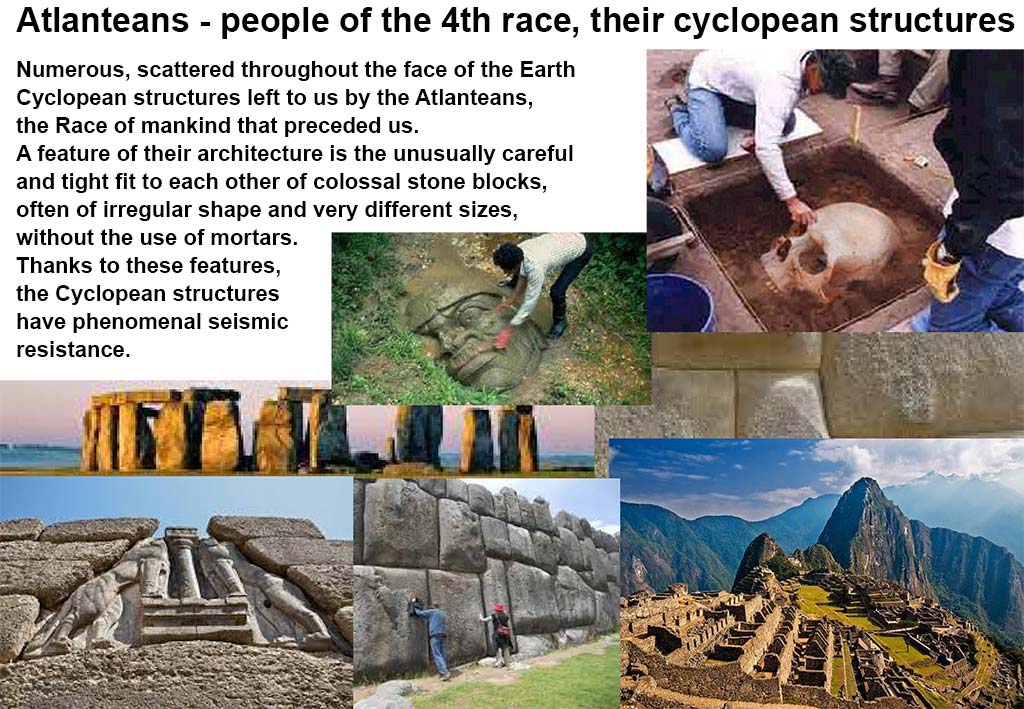 The significance of H.P. Blavatsky's ideas for modern times

Theosophical ideas presented by E.P. Blavatsky in her works, influenced the formation of the creative views of many artists and thinkers of the 20th century, such as:

Blavatsky's doctrine finds development in the anthroposophy of Rudolf Steiner and the Living Ethics of Helena Roerich, in the views of representatives of Russian religious philosophy of the late 19th - early 20th centuries, such as Vladimir Soloviev, Nikolai Berdyaev, Sergei Bulgakov, and others.

The modern theory of quantum physics, the concept of a holistic worldview, the doctrine of the energy-informational unity of the world are the scientific embodiment of the foundations of theosophy. The views of modern theosophists, whose activities spread throughout the world on the basis of ideas of unity and spiritual ideals, contribute to the processes of mutual integration of the culture of the East and West, interreligious tolerance and the preservation of peace in modern society, calling for the unity of all people of goodwill based on the spiritual values ​​of mankind.

Quotes from the works of H.P. Blavatsky

• All our greatness is in our thoughts. So let's think about beauty, because beauty is the basis of morality.
• Let a person conquer anger with love, evil with good, greed with generosity, and lie with truth.
• A person has no more valuable property than the lofty ideal to which he tirelessly ascends, and according to which he shapes his thoughts and feelings, and builds - and this is the best that he can do - his life.
• Comprehensive knowledge and scholarship, self-discipline and eloquence - this is the highest Good.
• Free your mind from evil and fill it with kindness.
• Everything ends and passes, only Truth is immortal and lives forever.
• Obligation is what “must” give to Humanity, our loved ones, our neighbors, our family, and above all what we owe to all those who are poorer and more defenseless than us. This is our duty, which, if not fulfilled during life, makes us spiritually bankrupt and leads to a state of moral collapse in our future incarnation.