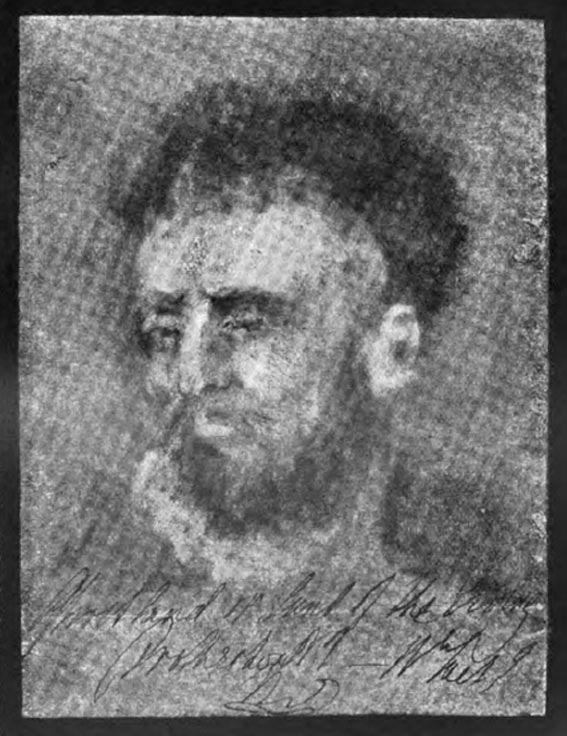 It happened in this wise: “On my way home to “The Lamasery” one day, I stopped at the Lotus Club and got some of the club note-paper and envelopes to use at home as occasion might require. It was late when I reached the house, and H.P.B. was at the dinner table already, with Mr. Judge and Dr. Marquette as guests. I laid the package of stationery on my desk in the writing-room (between which and the dining-room there was a dead wall, by the way), made a hurried toilet, and went to my seat at the table. At the close of the dinner we had drifted into talk about precipitations, and Judge asked H.P.B. if she would not make somebody's portrait for us.  As we were moving towards the writing-room, she asked him whose portrait he wished made, and he chose that of this particular of yogi, whom we knew by name as one held in great respect by the Masters. She crossed to my table, took a sheet of my crested club-paper, tore it in halfes, kept the half which had no imprint, and laid it down on her own blotting-paper. She then scraped perhaps a grain of the plumago of a Faber lead pencil on it, and then rubbed the surface for a minute or so with a circular motion of the palm of her right hand; after which she handed us the result. On the paper had come the desired and, setting portrait wholly aside the question of its phenomenal character, it is  an artistic production of power and genius. Ler Clear, the noted American portrait painter, declared it unique, distinktly an “individual” in the technical sense; on that no living artist within his knowledge could have produced.

The yogi is depicted in Samadhi, the head drawn partly aside, the eyes profoundly introspective and dead to external things, the body seemingly that of an absent tenant. There is a beard and hair of moderate length, the latter drawn with such skill that one sees through the upstanding locks, as it were - an effect obtained in good photographs, but hard to imitate with pencil or crayon.

The portrait is in a medium not easy to distinguish: it might be black crayon, without stamping, or black lead; but there is neither dust nor gloss on the surface to indicate which, no any marks of the stamp or the point used: hold the paper horizontally towards the light and you might fancy the pigment was  below surface, combined with the fibres. This incomparable picture was subjected in India later to the outrage of being rubbed with india-rubber to satisfy the curiosity of one of our Indian members, who had borrowed it as a special favour to "show his mother" and who wished to see if the pigment was really on or under the surface!

The effect of his vandal-like experiment is now seen in the obliteration of a part of the beard, and my sorrow over the disaster is not in the least mitigated by the knowledge that it not due to malice but to ignorance and the spirit of childish curiosity.

The yogi’s name  was pronounced by H.P.B. "Tiravala", but since coming to live in Madras Presidensy, I can very well imagine that she meant Thiruvalluvar, and that the portrait, now hanging in the Picture Annex of the Adyar Library, is really that of the revered philosopher of ancient Mylapur, the friend and teacher of the poor Pariahs.

As to the question whether he is still in the body or not I can venture no assertion, but from what H.P.B. used to say about him I always inferred that he was. And yet to all save Hindus that would seem incredible, since he is said to have written his immortal "Kural" something like a thousand years ago! He is classed in Southern India as one of the Siddhas, and like the other seventeen, is said to be still living in the Tirupati and Nilgiri Hills; keeping watch and ward over the Hindu religion. Themselves unseen, these Great Souls help, by their potent willpower, its friends and promoters and all lovers of mankind. May their benediction be with us!

In recalling the incidents for the present narrative, I note the fact that no aura or spiritual glow is depicted around the yogi’s head, although the H.P.B. account of him confirms that of his Indian admirers, that he was a person of the highest spirituality of aspiration and purest character.